Approaching the Twelfth Day of Christmas... 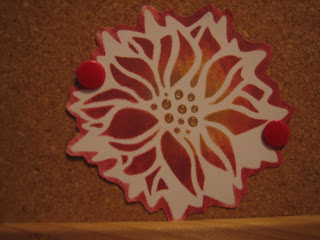 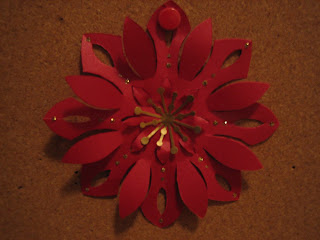 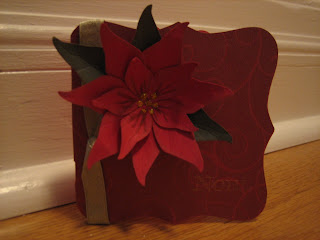 Now that the New Year is here, Christmas seems to be almost over. In our house, most of the baking has vanished, the decorations are slowly being packed away again, and the new gifts are being used/worn/read/listened to... However, the season really lasts until January 6th. Our neighbours used to have a Twelfth Night party, which was a great time to get together and relax after the rush of the holidays. In that spirit, I submit my poinsettias:
Sorry the staging leaves a little to be desired... I was trying for some dimension and texture with these. Making 3D objects with paper is a lot of trial and error, but mostly fun.
ONE: The top flower was created using a brass stencil. The idea was lifted straight from the Paper Wishes website (see the Webisode, here). Three colours of Pearlescent pigment ink pads were used, and I added some Diamond Glaze for extra dimension at the center.
TWO: The second flower was created with a Kirigami template, also from Paper Wishes. Kirigami is a bit like Origami--you fold the paper, Trace the design, cut out sections, then unfold. Parts of the design are lifted & curled, and I added some gold Stickles and a Starburst center from McGill Punches.
THREE: The last design also uses McGill Paper Blossom Punches, for the Lily. This one took a few tries and some internet image-searching before it looked right. Adding lots of veining on the leaves with an embossing stylus helped make it more realistic.
Anyway, just one more pop of beautiful Christmas red, before the season ends. Happy New Year!
Posted by canadian_liner at 18:07