Bump it Up Challenge--How ARE Ewe? 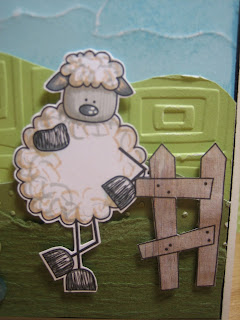 I've been exploring the world of down-loadable digi stamps, and found this adorable image from Whimsie Doodles. The designer is Melyssa Connolly who also creates stamp sets for There She Goes Clear Stamps.
The Whimsie Doodles blog sponsors a challenge every month, and the one for May is to "Bump it Up!" by including embossing on your project. 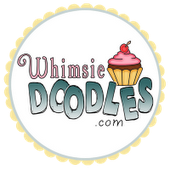 I purchased the "Ewe" which includes the image and sentiment and started experimenting with printing it out in various sizes on plain printer paper. If you open the image in a Word or other document  program, it is easy to re-size.
Once I had a size I was happy with, I printed it out on cardstock. I printed the fence on some barn wood paper (from Paper Wishes, a bargain at 49 cents!), by taping a scrap of the paper over the where the image would be printed. I coloured in the sheep with markers.

Here is the card: 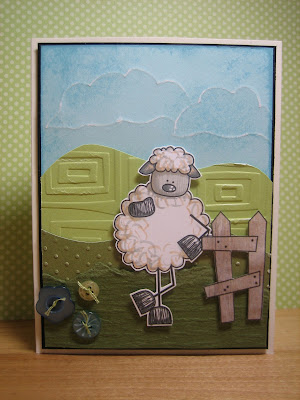 I used a couple of Sizzix embossing folders for the "hills" as well as some textured card stock.
Melyssa posted a great card with similar hills and buttons as part of the There She Goes "Mother of All Blog Hops" this past weekend, so I'm giving credit where it is due!
For the sky, I inked some 'Heavenly Blue' (CTMH) card stock, then turned it over and "drew" some clouds with an embossing stylus. I turned the paper back to the right side and lightly sanded that part to reveal the white core.
The upper part of the card may need SOMETHING more, but I'm not sure what, so rather than kill the project, I'm leaving it like this.

My mom LOVES sheep, so this will probably end up being sent to her at some point. 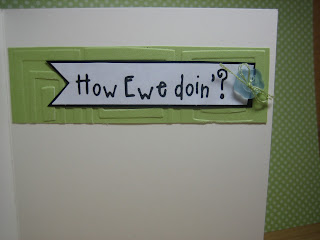 Here's the sentiment on the inside of the card:

Just used a scrap of the embossed paper, matted the sentiment on black and added a button tied with embroidery floss.

It was pretty easy and very satisfying to create with digital stamps!
Posted by canadian_liner at 19:44