Okay, not Christmas, but definitely COLD! 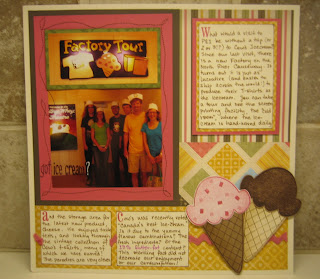 As its the first of the month, a new stamp set was just released at the {Stamps of Life}. It is called "candy2share" and looks like it will be a lot of fun to play with (take a look at {The Stamps of Life}).  Earlier this year, Stephanie released an ice-cream stamp set that was delicious. Even had drips to add to your cone. "Scream4ice-cream" had a companion set, "cone2dish." I used both on a scrapbook lay-out from our trip last summer, out east to Prince Edward Island. We toured Cow's Creamery, which makes the best ice-cream, bar none (this coming from a Wisconsin Culver's frozen-custard addict).
Don't those big, juicy cones look good enough to eat? 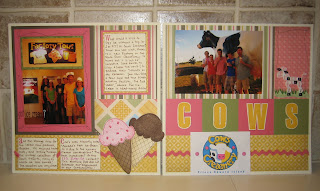 Here's the companion page. I made the little cow on the right with quilling paper. Putzy, but very satisfying! Patterned paper is Close-to-My-Heart's "Mayberry" collection.
Enough reminiscing about ice-cream; time to start Christmas baking...
Posted by canadian_liner at 11:12

Email ThisBlogThis!Share to TwitterShare to FacebookShare to Pinterest
Labels: Lay-outs