The Online Card Classes' Holiday Card Workshop has been great for inspiring ideas for gift tags, as well as holiday cards. I'll be doing a tag workshop for 10 people at the end of the month, and I promised them 12 different designs (a la Days of Ch.ristmas and Tim Holtz). Here's a sneak preview: 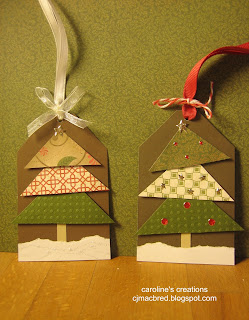 We'll start with these tags which just involve cutting, tearing and glueing. Some of my peeps have not done much crafting before, so I don't want to overwhelm them all at once. It was fun to use double sided paper on these as you just cut a series of gradually bigger squares in half, and then mix 'em up. 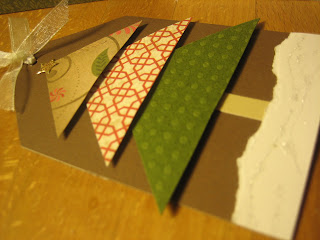 Foam-taping just the bottom edge of each layer added some tiered dimension. 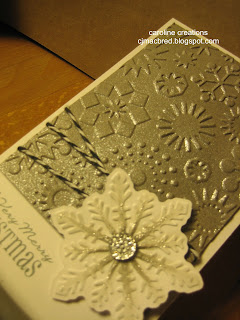 For this shimmery card, they will learn to use an embossing folder, then spray the resulting piece with glimmer mist (Smooch Spritz). The snowflake is a Sizzix "Embosslit" which cuts and embosses at the same time. It was glitzed up with some alcohol markers, Stickles and a beautiful CTMH gem. 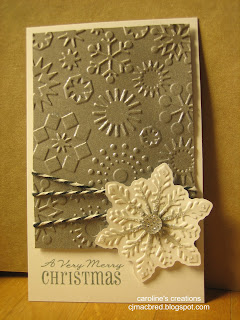 There will be a few other cards to hone some more paper-crafting techniques. But the piece-de-resistance/final item will be this snow-man globe card, where they will do some Copic marker colouring: 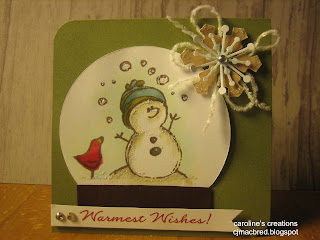 Its amazing how much dimension is added by just a little shading on either side of an outline stamp. This cutie is an older CTMH set.

Off to watch the next installment of Holiday Card Workshop...