Heard it on the Grape Vine... 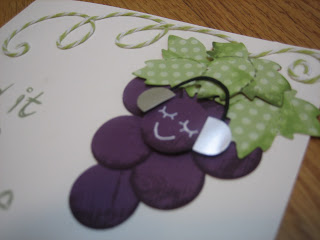 Number 3 in the countdown of top 10 Classic Rock-inspired cards... Don't think I'll actually get to TEN but I've been having fun!  You can see card #1 HERE and card #2 HERE.

I was inspired this week by the challenges at: 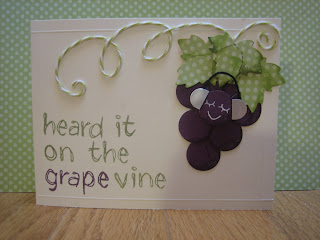 I made two versions of this card: on both, the grape vine leaves were cut from CTMH "Dotty for You" polka-dot paper, with a leaf die from Sizzix.  The grape vine itself is made with "honeydew" twine from The Twinery.  I used circles punched from textured cardstock arranged in a cluster of "grapes," but wasn't too happy with them--they looked a little flat. 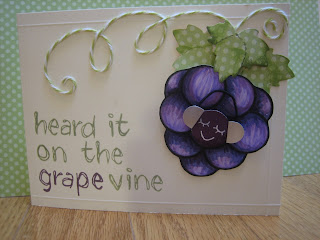 So I made a second attempt using a Paper Smooches free digi-stamp ("I love you BERRY much"), which I printed out and coloured with markers. Better.

The head-phones for the groovin' grape were made using a shape punched from silver metallic paper and a length of black "Memory Thread."  The face was created with one of the stamps from There She Goes Clear Stamps' "Perk Up" set .

The sentiment was stamped in Garden Green and Smokey Plum inks (pretty fruity!) from CTMH, using a discontinued font called "Doodle Alphabet." I've been paring the edges off my polymer alphabet stamps (what? cut your stamps?--thanks to Emily Leiphart for that great idea) to allow closer spacing on the block.

Off to listen to XM Radio's classic rock station, for more inspiration...